Firebase is a Backend as a Service (BaaS) that provides an advantage to mobile developers who use React Native for developing mobile applications. As a React Native developer, by using Firebase you can start building an MVP (minimum viable product), keeping the costs low and prototyping the application pretty fast.

In this tutorial, we will learn how to get started by integrating Firebase in a React Native application. We will also create a small application from scratch with the help of Firebase & React Native to see how they work together.

Firebase is a platform that got acquired by Google and has a healthy and active community. Most users in this community are web and mobile developers as Firebase can help with mobile analytics, push notification, crash reporting, and out-of-the-box it also provides email as well as social authentication.

To get started, you will need a target mobile OS, whether you choose to go with iOS or Android or both. Please refer to the React Native official documentation if you are setting up a React Native development environment for the first time. You will need SDK tools and Android Studio especially to set up a developer environment for Android. For iOS, you need Xcode installed on your macOS. You will also need:

When the above command is done running, traverse into the project directory using cd rnFirebaseDemo. Now, let’s check if everything is working correctly and our React Native application has been properly initialized by running one of the following commands:

This command will run the default screen as shown below in an iOS simulator or Android emulator but it will take a few moments since we are running it for the first time. 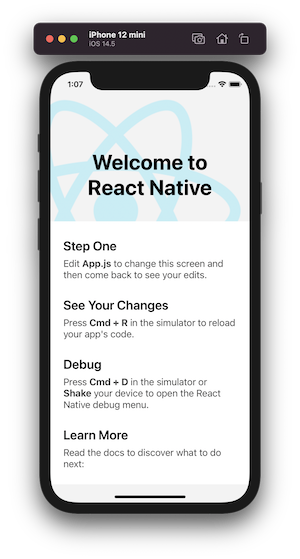 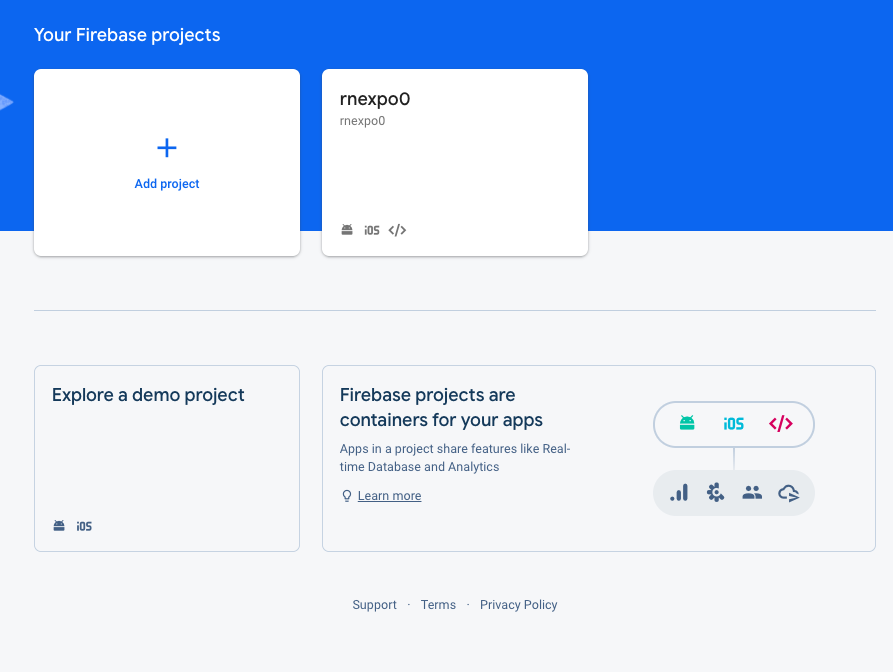 Initially, you can create a free tier Firebase project known as Spark Plan. To know about pricing and more information on Firebase plans, take a look here.

Now, click on the Add project button and then enter the name of the Firebase project. 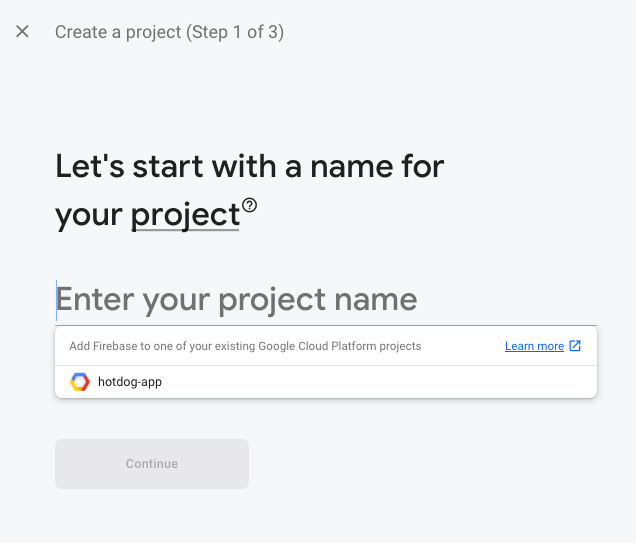 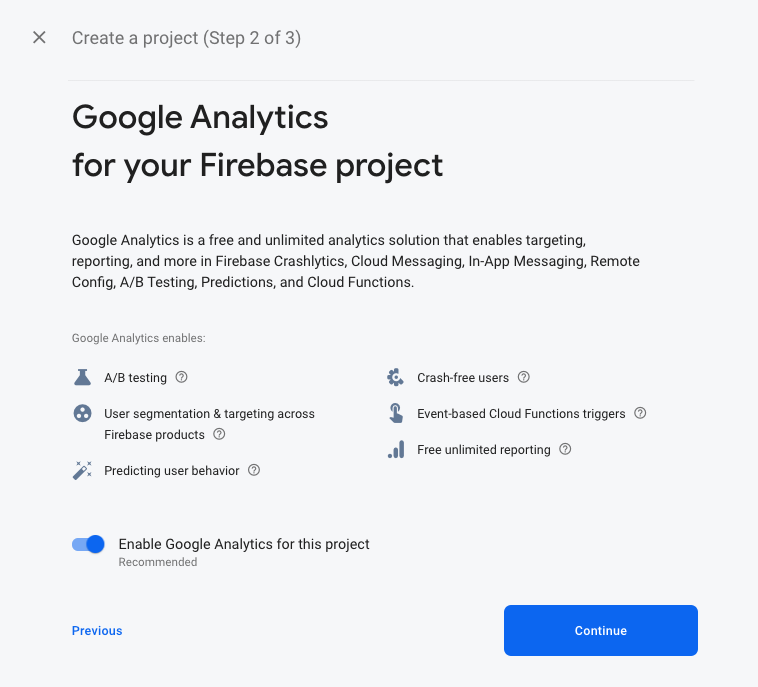 On the step 3 screen, you can leave everything as default and press the Create project button to create a new Firebase project. 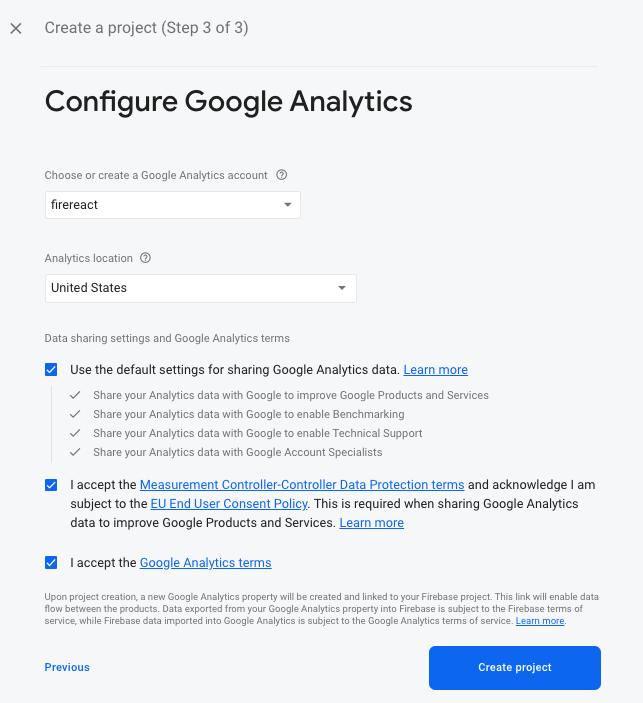 When the loading finishes, press the button and you’ll be welcomed by the main dashboard screen of the Firebase project. 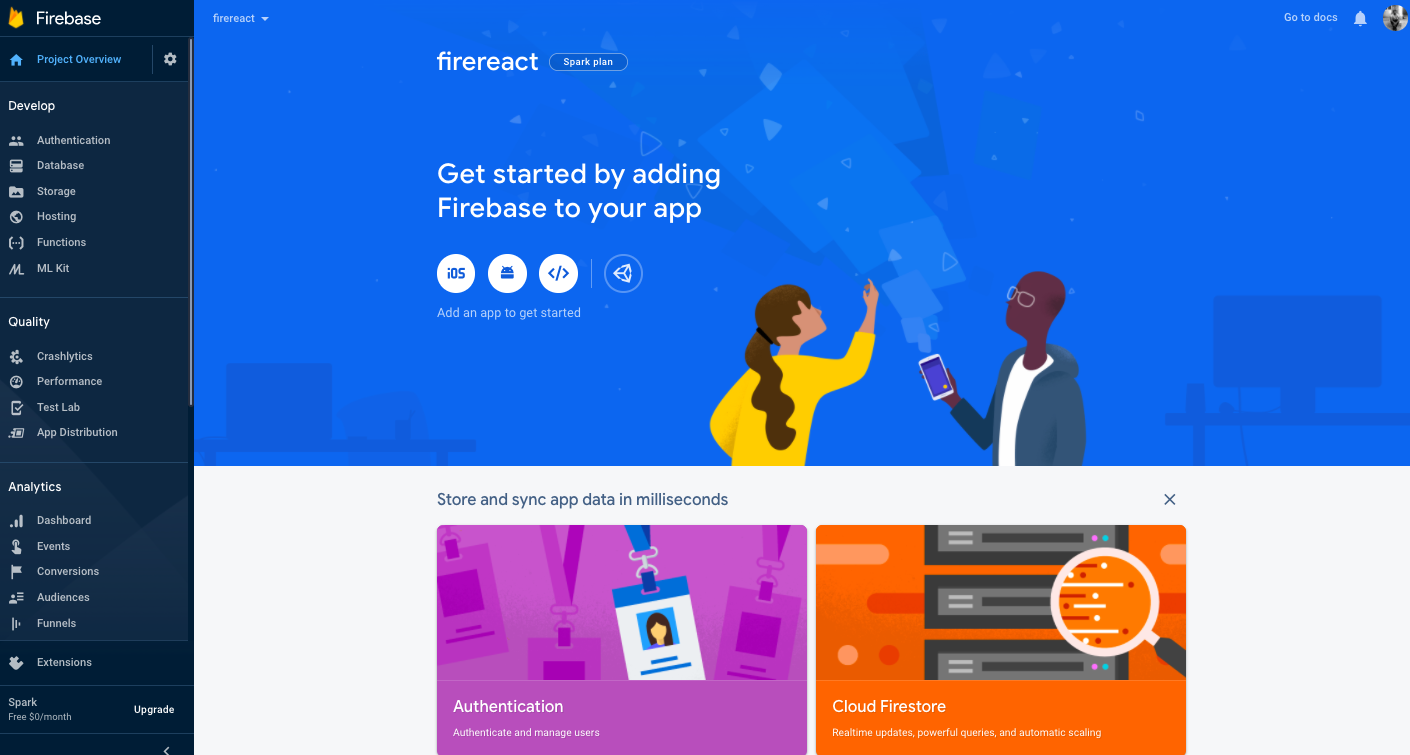 The react-native-firebase library is the officially recommended collection of packages that brings React Native support for all Firebase services on both Android and iOS apps.

To add it to our existing React Native application, we need to install the following dependency:

To connect the iOS app with your Firebase project’s configuration, you need to generate, download, and add a GoogleService-Info.plist file to the iOS bundle.

From the Firebase dashboard screen, click on Project Overview > Settings and in the General tab, go to Your Apps section. Click on the Add app button. A modal appears as shown below. 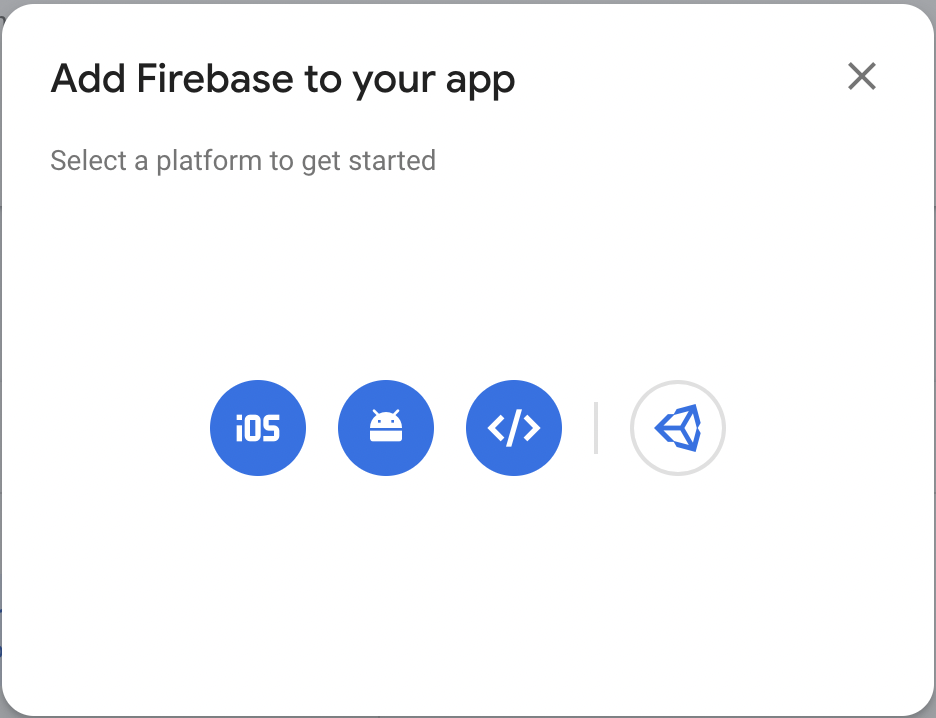 Select iOS in the modal and then, in step 1, enter your app details and click the Register app button. 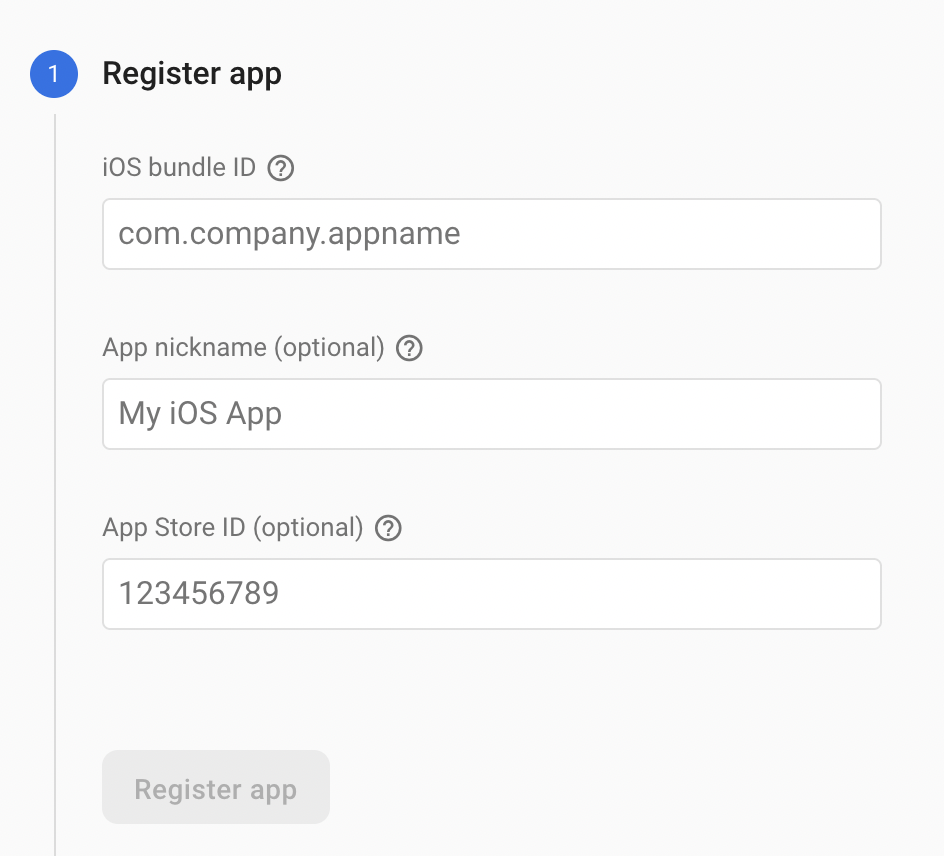 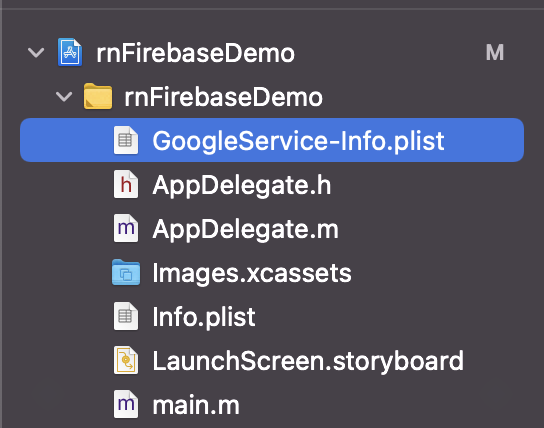 Select the downloaded GoogleService-Info.plist file from your computer, and ensure the "Copy items if needed" checkbox is enabled.

To allow Firebase on iOS to use the credentials, the Firebase iOS SDK must be configured during the bootstrap phase of your application. Open the /ios/{projectName}/AppDelegate.m file and, at the top of the file, add:

Within the same file, add the following at the top of the didFinishLaunchingWithOptions function:

Next, rebuild the iOS app. Execute the following commands:

To connect the Android app to your Firebase project’s configuration, you need to generate, download and add a google-services.json file to the iOS bundle.

From the Firebase dashboard screen, click on Project Overview > Settings and in the General tab, go to the “Your Apps” section. Click on the Add app button and then click the button with the Android icon in the modal.

In Step 1, enter the details of your app and then click the button “Register app”.

The "Android package name" in the image below, must match your local projects package name which can be found inside of the manifest tag within the /android/app/src/main/AndroidManifest.xml file within your project. 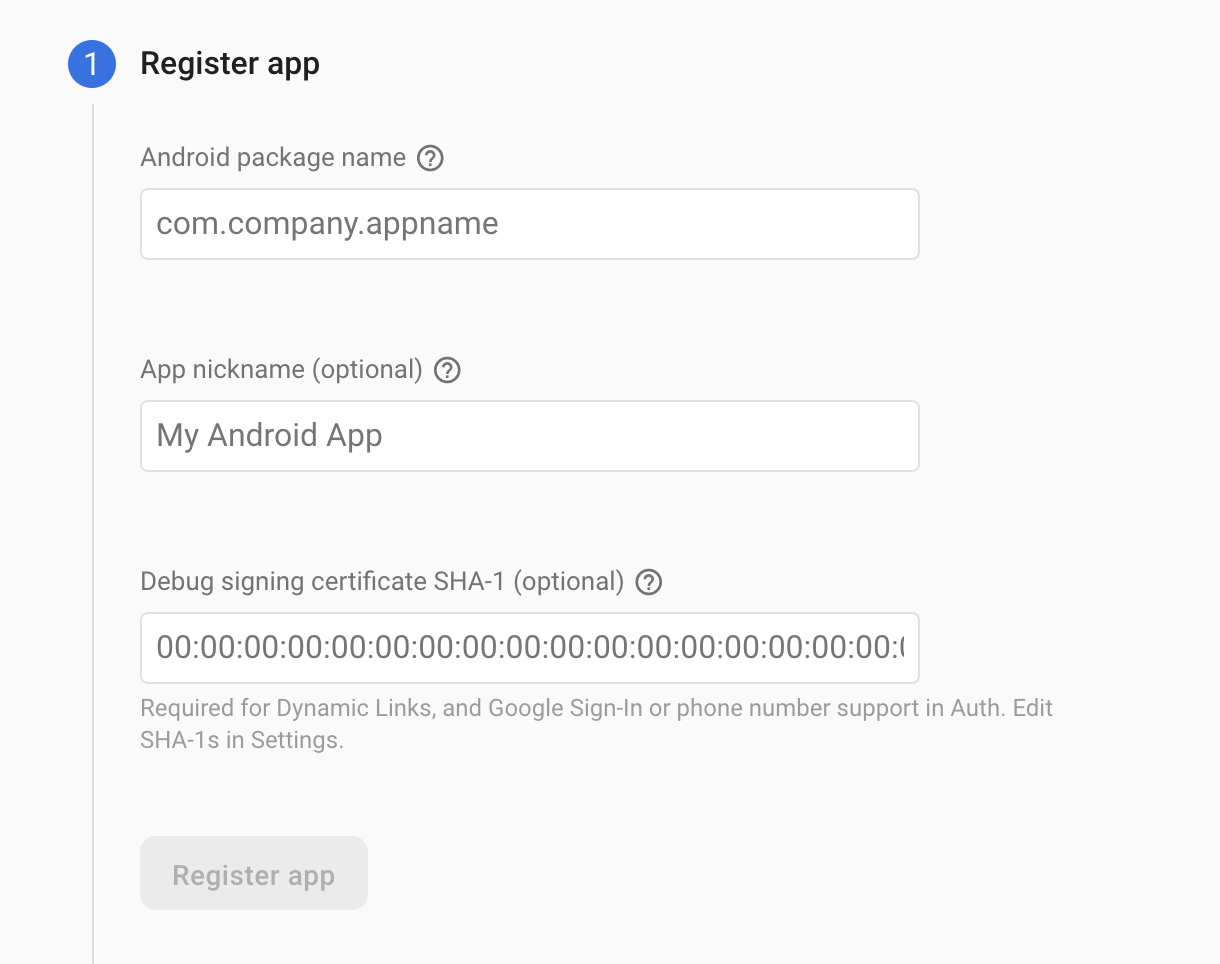 Lastly, execute the plugin by adding the following to your /android/app/build.gradle file:

Next, rebuild the android app. Execute the following commands:

The package is used to configure and install Firebase SDK in a React Native project. To use any of the Firebase features such as Auth, Firestore, Storage, or Realtime Database, you have to install the individual packages from the React Native Firebase library.

In this tutorial, let’s install and configure the Realtime Database. Open the terminal window and execute the following series of commands:

When we open the project in a code editor, its structure looks like this: 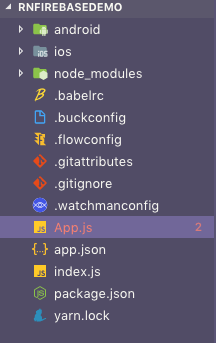 We need to make some modifications before we can really start building our app. Create an src directory inside the root folder. This is where our app components and screens will live. Further, within the src directory, we will create two folders: screens and components.

Let us create our first screen, the Home screen, inside screens/ with a new file Home.js.

Our next screen is going to be Add Item. Create a new file called AddItem.js.

Our last screen is going to be a list of items that we need to display. In the same directory, create a new file called List.js.

To navigate between different screens, we need to add the react-navigation library. We are going to use the 5.0.0 version.

Then, add the following line at the top of the index.js file:

The next step is to run the command below and link the libraries we just installed:

After adding this package, let us run the build process again:

Now, to see it in action, let us add the Home component as our first screen. Add the following code in App.js.

At this stage, if we go to the simulator, we will see the following result:

The Home Screen is showing up. We will add two other screens as routes to AppNavigator in order to navigate to them through the Home Screen.

Navigating between the screens

Previously, we defined a stack navigator with three routes but we didn't hook them up in order to navigate between them. Well, this is an easy task too. The react-navigation library provides us with a way to manage navigation from one screen to another and back. To make this work, we will modify Home.js.

In the code above, we are adding a Button component from the react-native API. react-navigation passes a navigation prop in the form of navigation.navigate() to every screen in the stack navigator. We have to use the same screen name on the onPress function to navigate as we defined in App.js under AppNavigator.

You can also customize the back button manually with your own styling on both screens AddItem and List but, for our demonstration, we are going to use the default styling.

Creating a Database with Firebase

Go to the Firebase Console, and click the Realtime Database from the menu bar. If you are creating a realtime database for the first time in your Firebase project, click the Create Database button.

Then, when asked for rules, enable test mode. For the example app we’re building in this demo, we will enable the database in the test mode.

Adding Data from the App to Firebase

In this section, we will edit AddItem.js which represents an input field and a button. The user can add an item to the list and it will get saved to Firebase data.

In the code above, we are adding a Firebase database instance from config.js and db and then pushing any item that the user adds through addItem and handleSubmit(). You will get an alert message when you press the Add button to add the item from the input value as shown below.

To verify that the data is there in the database, go to your Firebase console.

Fetching Items from the Database

To fetch data from the Firebase database, we are going to use the same reference to db in List.js.

For the ItemComponent, we create a new file inside components/ItemComponent.js. This is a non-screen component. Only the List will use it to map and display each item.

This step concludes the integration of a Firebase database with our React Native app. You can now add the new data items and fetch them from the database as shown below.

In this tutorial, we’ve shown you how to integrate Firebase with a React Native application. You don’t need a complete server that creates an API and further uses a database to prototype or build an MVP of your application.

You can find the complete code inside this Github repo.